The Creative Power of the Awareness of Beauty

It’s October – already! and our featured artwork this month is one of our most popular pieces. Entitled Lion Grass, this photograph was taken at Kill Devil Hills, NC. It’s a composite piece that includes an encaustic painting, and a mysterious presence. It’s waiting to tell you a vast secret…if you would come close enough to listen. A wisdom of the earth here to remind you that all is not ever what it seems!

As we look out in our world today and feel like it is falling apart in so many ways, I’m posting this today as a reminder to pay attention to the seen and be aware of what may be unseen. There have always been hard times, when things seemed to be at their very worst – and yet what are we and what are we made of? What we can remember about our infinite nature can show us the way to being lions among sheep. 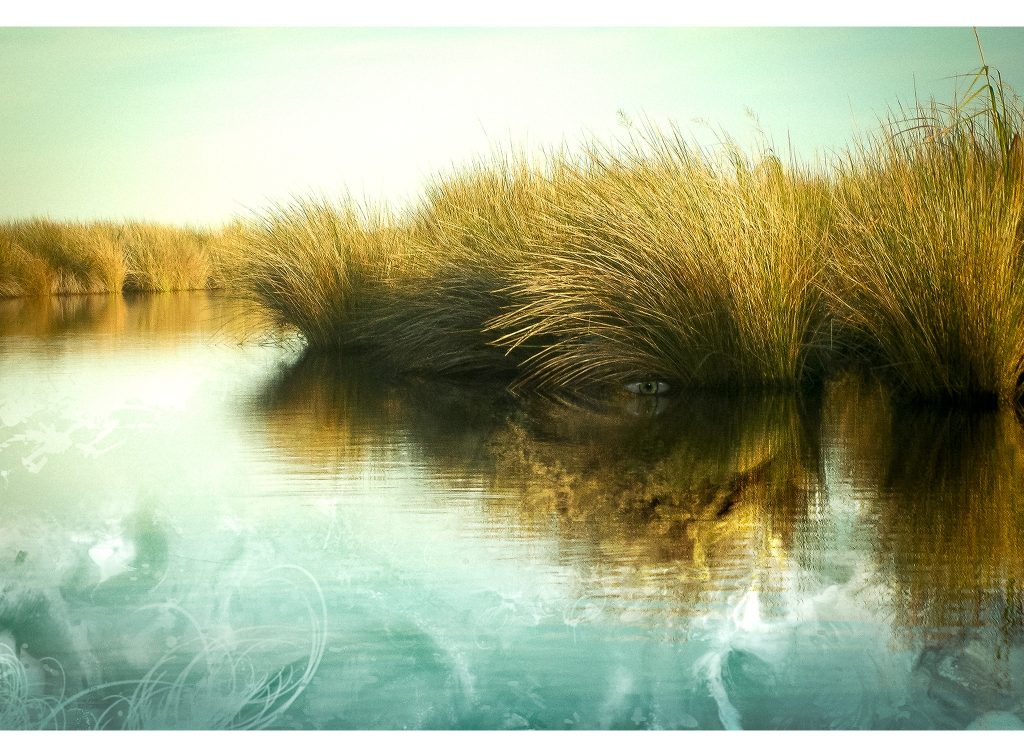 It’s a powerful teaching from the Sufi that I love: Read Full Story HERE.

A lion cub got lost on the savannah. Separated from his pride, he gradually forgot his origins and fell in with a herd of sheep. Living among the sheep, he began to bleat like a sheep and eat grass and so on. Though he grew into the form of a powerful lion, in his mind he was a sheep. One day he was confronted by a pride of lions. He tried to flee with the other sheep, but he was surrounded. He shook with fear, but the lions did not attack. Instead they expressed their puzzlement: “You are a lion. Why are you acting like a sheep?” But however they might try to convince him, the lion would not believe them. Finally, in frustration, they chased him to the shore of a little pond. There the lion gazed at his reflection and saw that he was a lion. Suddenly his whole world changed.

That is a story about the human condition. We are born as lions, but somehow we fall in with sheep. What does it mean to fall in with sheep? We become impressed with limitation. We are seen as sheep and sooner or later we come to accept the validity of that assessment. We internalize the world’s judgment and simply take it for granted. It’s not that any particular person intended to deceive us. Those who have planted this impression in us have themselves been infected by the impression from others. It is a kind of psychic disease that is transmitted down the generations, through cultures, through families—a spiritual ailment that makes one feel less than one’s true worth. It is a gloom that circulates through the world endlessly, and all of us are susceptible to it, all of us have in some ways been touched by it.

But that is not the only force in the world. If it were, the world would crumble under the weight of its own torpor. There is another force, the force of illumination, the creative power of the awareness of beauty. Each one of us is a battleground in which these two forces clash. So far as we are locked in the grip of the illusory judgments that have been thrust on us, so far are we incapable of seeing beauty in ourselves, and accordingly incapable of seeing it in others. We then become complicit in the perpetuation of the dark gaze of misjudgment.

Here’s to not being impressed with limitations…to knowing your divine being-ness is infinite and removing any trace of “the dark gaze of misjudgment” …with big sorts of love from BIMG…ROAR!!